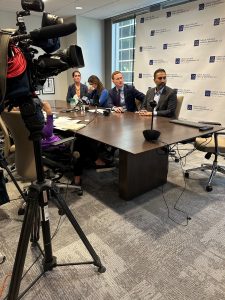 MST Law is one of two law firms representing the estate of Sania Khan. For those unfamiliar, on July 18, 2022, Sania’s estranged husband, Raheel Ahmad, drove 700 miles from Georgia to downtown Chicago, entered the high-rise apartment building in Streeterville where Sania lived, and shot Sania to death with a gun he had brought with him. When officers arrived on the scene, he turned the gun on himself.

MST Law and TPMB Legal filed a Complaint in the Circuit Court of Cook County alleging that Sania had informed the building’s management and security that Raheel was a serious threat and requested that they take measures to protect her safety. Specifically, she requested that Raheel be removed from the lease, that her apartment locks be changed and that he be placed on a “no entry” list for the building. Despite these measures, the Defendants allowed Raheel to enter the building under the false pretenses that he was there to view apartments for rent. The lawsuit further alleges that the Defendants failed to check Raheel’s identification before escorting him into the secured portion of the building (i.e. the residents’ area). Shortly thereafter, Raheel was allowed to roam the building unaccompanied and eventually gained entry into Sania’s apartment, allowing him to then kill Sania and turn the gun on himself.