MST Founder Furqan Mohammed was introduced as a distinguished guest at the WE Women’s Expo held at the Waterford Banquet in Elmhurst, Illinois. The Expo was a highly anticipated a networking event for minority-owned businesses. Over 75 booths and stalls were on display at the Expo, and featured traditional Indian dancing and several keynote speakers. 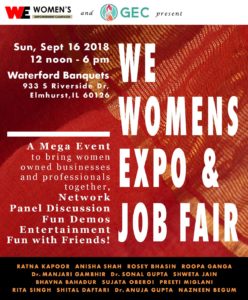